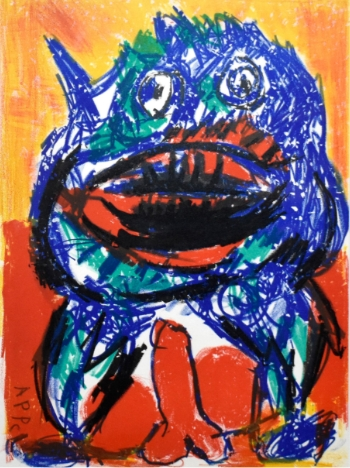 COBRA (or CoBrA) was a European avant-garde movement active from 1948 to 1951. The name was coined in 1948 by Christian Dotremont from the initials of the members’ home cities: Copenhagen (Co), Brussels (Br), Amsterdam (A).

During the time of occupation of World War II, the Netherlands had been disconnected from the art world beyond its borders. COBRA was formed shortly thereafter. This international movement of artists who worked experimentally evolved from the criticisms of Western society and a common desire to break away from existing art movements, including “detested” naturalism and “sterile” abstraction. Experimentation was the symbol of an unfettered freedom, which, according to Constant, was ultimately embodied by children and the expressions of children. COBRA was formed by Karel Appel, Constant, Corneille, Christian Dotremont, Asger Jorn, and Joseph Noiret on 8 November 1948 in the Café Notre-Dame, Paris, with the signing of a manifesto, “La cause était entendue” (“The Case Was Settled”), drawn up by Dotremont. Formed with a unifying doctrine of complete freedom of colour and form, as well as antipathy towards Surrealism, the artists also shared an interest in Marxism as well as modernism.

Their working method was based on spontaneity and experiment, and they drew their inspiration in particular from children’s drawings, from primitive art forms and from the work of Paul Klee and Joan Miró.

Coming together as an amalgamation of the Dutch group Reflex, the Danish group Høst and the Belgian Revolutionary Surrealist Group, the group only lasted a few years but managed to achieve a number of objectives in that time: the periodical Cobra, a series of collaborations between various members called Peintures-Mot and two large-scale exhibitions. The first of these was held at the Stedelijk Museum in Amsterdam, November 1949, the other at the Palais des Beaux-Arts in Liège in 1951.

In November 1949 the group officially changed its name to Internationale des Artistes Expérimentaux with membership having spread across Europe and the United States, although this name has never stuck. The movement was officially disbanded in 1951, but many of its members remained close, with Dotremont in particular continuing collaborations with many of the leading members of the group.[5] The primary focus of the group consisted of semi-abstract paintings with brilliant color, violent brushwork, and distorted human figures inspired by primitive and folk art and similar to American action painting. Cobra was a milestone in the development of Tachisme and European abstract expressionism.

Cobra was perhaps the last avant-garde movement of the twentieth century.[6] According to Nathalie Aubert the group only lasted officially for three years (1948 to 1951). After that period each artist in the group developed their own individual paths.[7]

Manifesto[edit]
The manifesto, entitled, "La cause était entendue" (The Case Was Settled) was written by CoBrA member Christian Dotremont and signed by all founding members in Paris in 1948. It was directly speaking to their experience attending the Centre International de Documentation sur l’Art d’Avant-garde in which they felt the atmosphere was sterile and authoritarian. It was a statement of working collaboratively in an organic mode of experimentation in order to develop their work separate from the current place of the avant-garde movement. The name of the manifesto was also a play on words from an earlier document signed by Belgian and French Revolutionary Surrealists in July 1947, entitled "La cause est entendue" (The Case Is Settled)