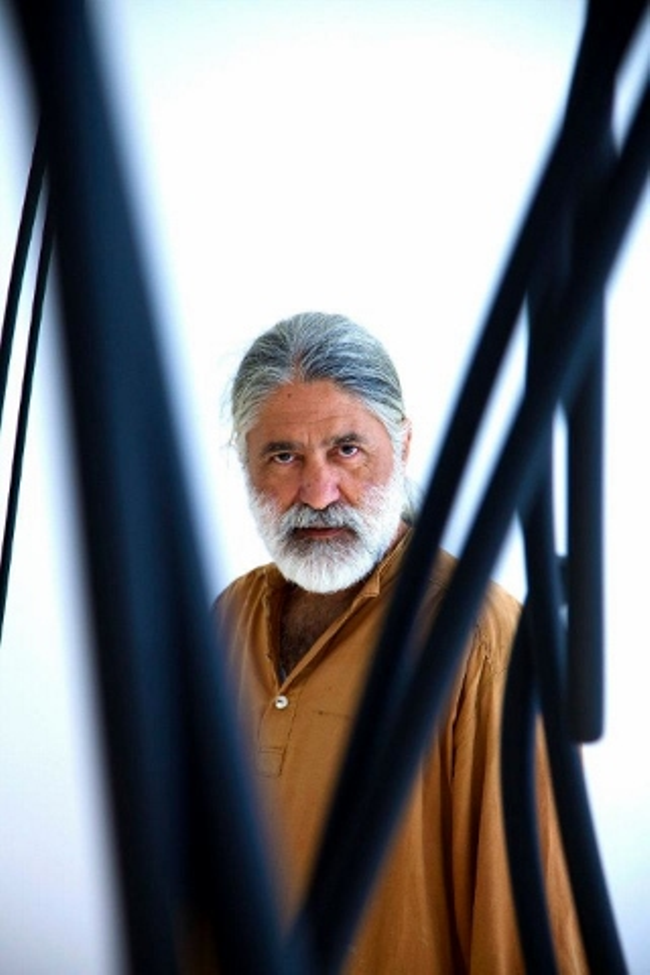 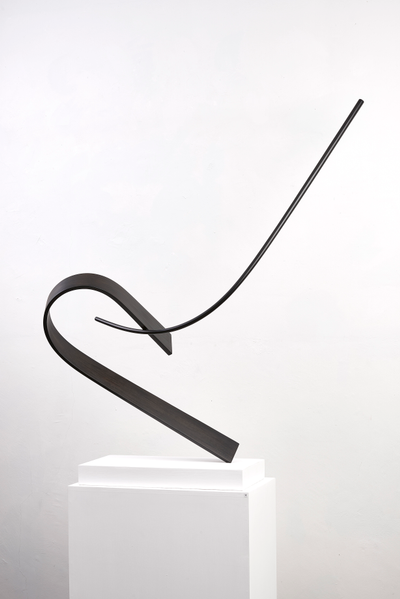 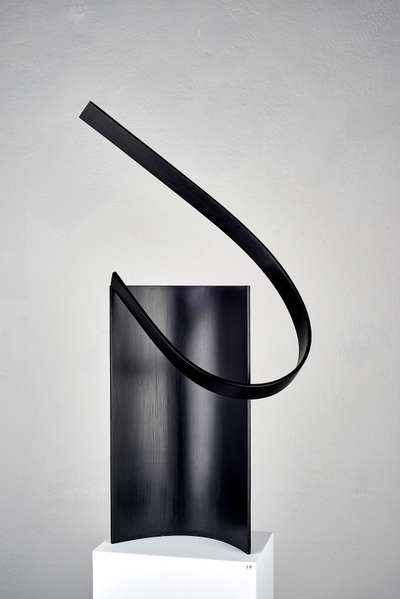 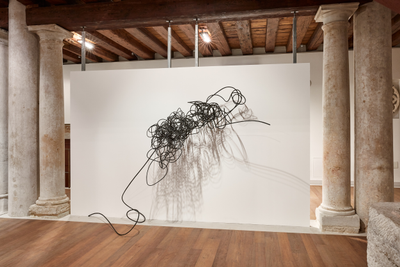 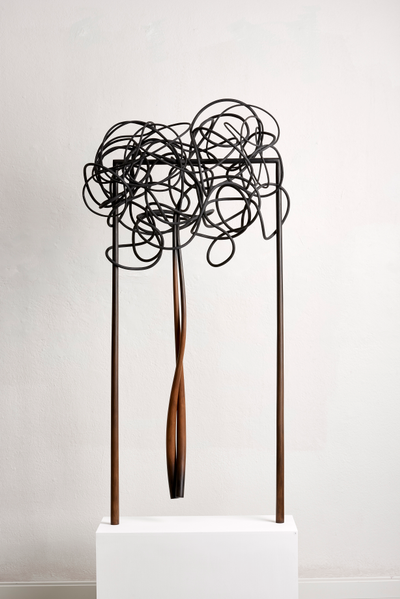 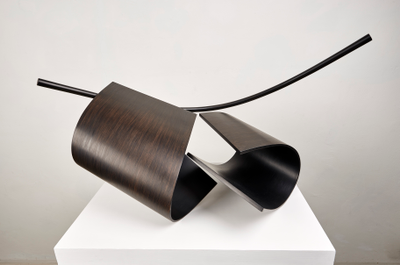 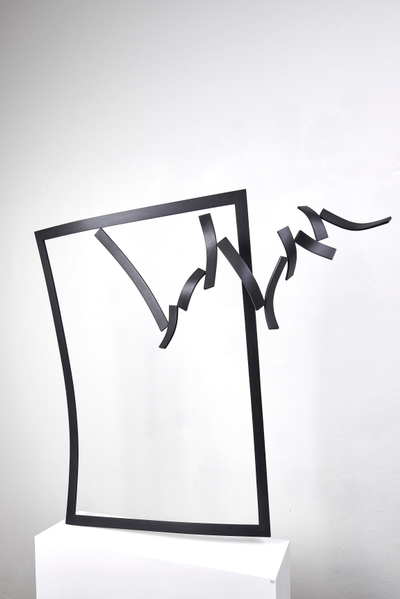 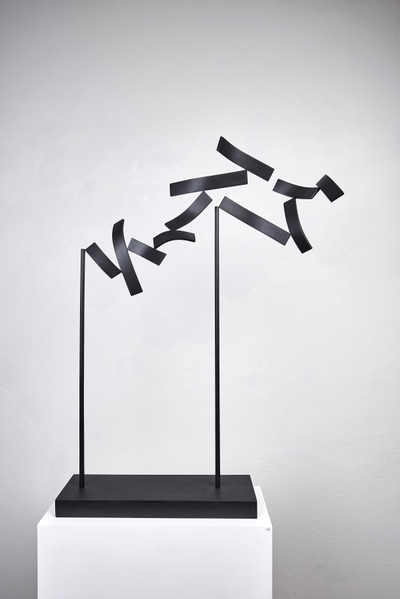 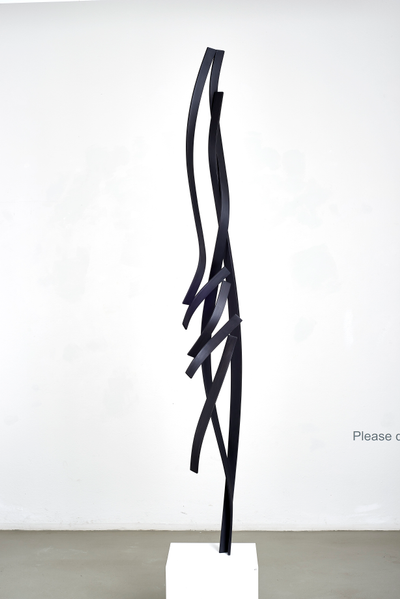 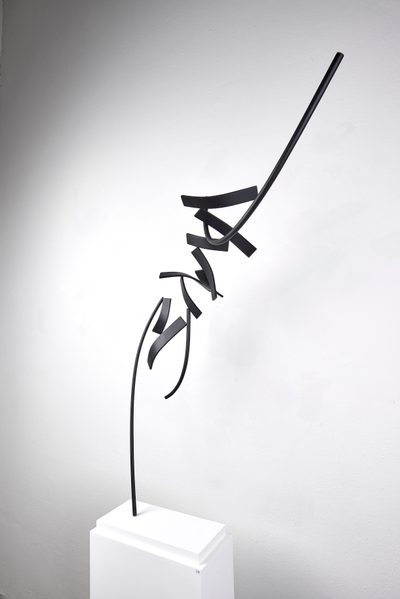 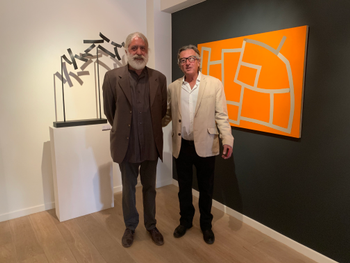 Roberto almagno’s sculptures may begin life rooted to the ground or attached to the wall, but they extend out into space as they attempt to almost dissolve into nothingness.

his most celebrated sculpture is the 24 meter ‘Sciamare’ which was shown in the vast throne Room of Rome’s palazzo venezia. the ground was completely covered with ash which his elderly parents had been patiently collecting from their log fires over a period of some 4 years. out of the ground emerged these thin, perfectly formed, elongated and abstract forms which at seemingly impossible angles, soared upwards to the heavens; an army of silent pegasuses floating out into the sky.

So much contemporary sculpture is concerned with weight and a commentary on man’s place in the world, that Roberto almagno’s uniqueness in the present panorama becomes even more special. Instead of being about man and society, he is concerned with levity and spirit. his is a search for the purity and perfection of form; an attempt both to take art out of the world, yet also a search for a metaphor for the perfection of the universe.

‘Sculpture is prevalently form, its shadow is silence’ - roberto almagno

the artist affirms that when he goes to the forests outside Rome to collect his raw materials, he never

cuts down but only collects branches which have already ended their lives, having been separated from the trees to which they once belonged. he gathers these abandoned pieces and takes them back to his studio to breathe into them a new spirit and give them a new life. this shamanic quality to his practice is evident in all his utterings about his art.

‘I no longer think of sculpture as a stable object but as form, an ongoing and unending flow, and also as a process that marks existence through that constant uncertainty, through a dialogue resolved by obeying space but without concretely occupying it. I am searching for fleeting shapes which move from very light semblances and rise into the air’ - roberto almagno

the sculptures carry with them an absolute classicness in their formal attributes, and with that an understanding of the history of the medium in particular and art in general. yet there is also a perception that these are also works of his time. In this acceptance of his place in the grand story, there is a humility which can be seen in his working method and which derives from the ancient craftsman who, since very early on in man’s history, would take fire to a dampened wooden surface to bend it.

the artist’s family were blacksmiths and he has a strong childhood memory of the pleasure he would get from lighting the forge and watching the fire as it grew. now he uses that fire to bend the sculpted wood to his will. although, as I stated at the outset, Roberto almagno’s sculptures are about lightness and about staring into the void, they do have a weight to them and that is the shadow they cast. this becomes a form of echo of the work itself but whereas the sculpture may soar out into space in its quest for lightness and flight, the shadow will always remain rooted to the surface it is reflected in.

perhaps the most interesting aspect of the artist’s concern with lightness is that it has nothing to do with size. ‘flutto’ which is in our exhibition is over 8 metres in length and the previously mentioned ‘Sciamare’ needs a room 24 metres long to accommodate its galloping army of forms.

‘I bend and flex my pieces of wood so that they can capture the wind which covers them and allows them to begin a journey, resting and supported by that wind and by that breath of air which caresses and supports them’ - roberto almagno

when one looks at these delicate, sinewy and often impossibly large creations, what strikes one most strongly is the question of how they manage to sustain themselves. why do they not just collapse under their own weight? this idea that there must be great weight to balance such works is revealed to be as far from the mark as is imaginable. even the very minimal attachment to the ground is achieved through light

ness and balance. the illusion created is that they are sustained virtually by air alone. In this perfect balance between weight and form lies their poetry and the unique voice of the artist.

his search for an artistic perfection contains a strong element of mysticism; an alchemical process of transforming the base metal of apparently randomly selected abandoned pieces of wood into the pure gold of an absolute form.

‘I see in ashes the essence of all forms, continually changing, precarious and transitory’ - roberto almagno

his drawings made with ash and soot continue this shamanic process. he has no interest in any kind of figuration because his search is for a formal perfection, yet allied to an element of mystery. how do these sculptures stay up? and how do layers of ash and soot give the illusion that we are looking at paintings? So perfect are his works that they can make us forget that a human hand, through enormous dedication and time consuming labour, honed these objects into a perfect shape, then through an ancient ritual of water and fire, bent them into the forms he was searching for. we feel we are witnessing objects from a long distant golden age and yet also a form which in our modern fascination with oriental minimalism and mysticism sits easily and comfortably in a contemporary artistic context. proust in ‘Remembrances of things past’ recounts an episode of the aesthete, philosopher bergotte admiring vermeer’s ‘vue of delft’ and dying in front of it. It seems that proust himself had had a fit in front of the same painting at a point in his life. did bergotte die with a smile on his face? certainly proust had no doubt of the power of art to profoundly affect human sensitivity. Stendhal talked of losing all bearings when confronted with the beauty of florence and this had subsequently become known as the famous ‘syndrome of Stendhal’. the importance of ‘beauty’ (however we define it) not as a mere bourgeois adjunct, but as a fundamental vehicle for change was understood by these literary giants but during the social revolution of the 60s and the critical philosophies coming out of the frankfurt School, ‘beauty’ became a dirty word; at best an irrelevance, at worst a mere sop to the bourgeoisie. the fundamental error, in my view, was seeing beauty as a passive object and ignoring the unique cathartic ability of ‘beauty’ to elicit great emotional responses on the part of the beholder and maybe change him or her forever.

‘I want to make sculptures which seem to rise into the sky with force yet full of harmony; works that express the prayer and sacrifice of men when faced with time and infinite space’ - roberto Almagno