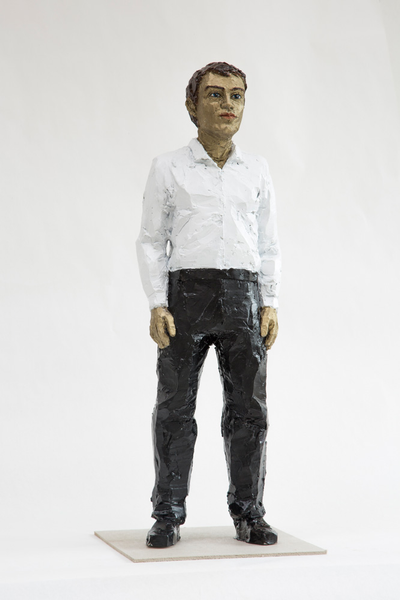 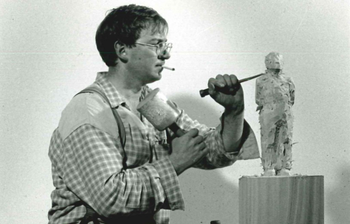 Lives and works in Karlsruhe and Berlin, Germany, and Meisenthal, France.

Stephan Balkenhol is a sculptor in the strict sense of the word. He carves figurative motifs, representations of people and animals in wood, both as standing, three-dimensional sculptures, and as two-dimensional relief panels. Balkenhol often combines his typical, so-called column figures with colourful relief panels. In this way he attempts to link sculpture to painting and to the representational capacities of this medium. Historically, the importance of Stephan Balkenhol, lies in the fact that he, precisely in the aftermath of Concept and Minimal Art, was able to reconcile a minimal formal language with figurative sculpture in wood. Over the last three decades, far removed from the prejudices that exist concerning traditional European wood carving and its supposed irreconcilability with modern and contemporary art, Stephan Balkenhol has developed a wholly original and inimitable oeuvre.

The most important solo shows of Stephan Balkenhol include in Kunsthalle Emden, Germany (2018), Centro de Arte Contemporáneo de Málaga, Spain (2018), the MMOMA – Moscow Museum of Modern Art, Russia (2016), the Fondation Fernet-Branca, Saint-Louis, France (May 2016), the Leopold-Hoesch-Museum, Düren, Germany (2015), the Landesgalerie Linz, Austria (2014-2015), the Kunstmuseum Ravensburg, Germany (2014), the St. Elizabeth Church in Kassel, Germany (2012), the Musée de Grenoble, France (2010), the Deichtorhallen in Hamburg, Germany (2009), the National Museum of Art Osaka, Japan (2005) and the Sprengel Museum in Hanover, Germany (2003). In 2006-2007, an extensive exhibition of his work travelled from the Staatliche Kunsthalle Baden-Baden, Germany to the MKM Museum Küppersmühle für Moderne Kunst, Duisburg, Germany and on to the Museum der Moderne Salzburg Mönchsberg, Austria.
Although Stephan Balkenhol is mostly known for his figurative wooden sculptures, many of his monumental bronze sculptures can be found in the urban public space - in cities as Berlin, Chicago, Johannesburg, Courtray, London, Paris and Salzburg. Sculptures of the internationally renowned artist are included in major museum and private collections worldwide, in M HKA - Museum of Contemporary Art, Antwerp, the Neue Nationalgalerie in Berlin and the Hirshhorn Museum and Sculpture Garden in Washington, US. amongst others.

1986
working stipendium of the Free Hansatown of Hamburg, Germany

1988-89
teaches at the Hochschule für Bildende Künste, Hamburg, Germany
Förderpreis of the international prize of the State of Baden-Württemberg, Germany
Bremer Kunstpreis, Germany