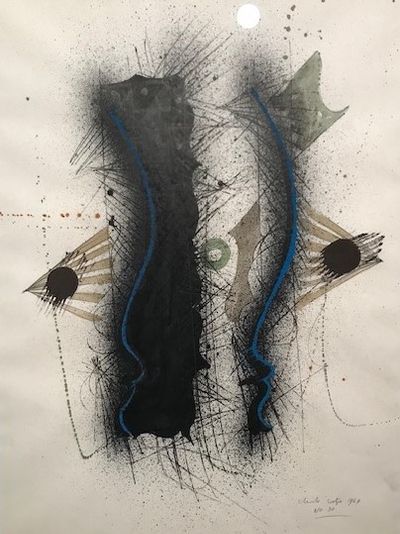 Christo Coetzee was born in Johannesburg on 24 March 1929. His father died when he was 10 years old, and he was raised by his mother and his two sisters who were 16 and 20 years older than him.

Growing up in Turffontein, Coetzee had no lack of material to spark his imagination, and he often spent his evenings making mud-sculptures in the garden after the five-o’clock-rains. During his childhood he built a miniature theatre complete with furniture and grand piano, and also made chessmen for his four-sided chessboard out of washers and screws which he glued together and painted in bright colours. A friend of Christo’s parents, Finie Basson, owned many interesting works of art, and Christo found inspiration in her collection. When he was 13, she gave Coetzee his first commission – a medium sized oil painting of pink and white roses – for which she paid him £5 (Binge-Coetzee in Ballot, 1999).

Coetzee attended Wits University from 1947 to 1950, and among his classmates were a number of artists with whom he would maintain friendships for many years: Cecil Skotnes, Esmé Berman and Gordon Vorster, among others. Also during his time at Wits, Christo was able to meet Alexis Preller and visit the studio of JH Pierneef.

After his graduation at the end of 1950, Coetzee had his first solo exhibition in Cape Town which was opened by John Paris of the SA National Art Gallery. He then travelled to London with a Postgraduate scholarship from Wits, where his talent was further developed under the guidance of Prof. William Coldstream at the Slade School of Art.

As a young South African artist with a dynamic and developing personality Christo Coetzee found himself, immediately after his formal training in Johannesburg (1947 - 50), in the privileged position of being able to experience the great variety [of art movements and styles of his time] at close quarters in a number of overseas centres for a considerable number of years. From 1954 Coetzee […] regularly presented his work at solo and group exhibitions in famous venues in London, Milan, Paris, Japan and from 1965 in South Africa and Spain. During this time he engaged with some prominent artists and important art critics. It was not long before a number of important galleries as well as corporate and private collectors in South Africa and abroad began to acquire the works of the artist (Ballot, 1999. pp 27, 28).

In spring of 1952 Coetzee and Marjorie Long were married. They travelled to Spain for their honeymoon where they stayed for several months. After the journey Marjorie returned to South Africa to continue with her teaching work at the University, and Christo stayed behind in London for about 6 months until the beginning of 1953. He returned to South Africa then, but only stayed for the remainder of that year. By the end of 1953, Christo had gone back to London by boat from Durban harbour. Marjorie never joined him overseas again, and though they always remained good friends, they divorced 11 years after their marriage.

Coetzee’s first job in London, arranged for him by a friend, was as a salesman for a tobacco company, but he was unhappy there as the work was administrative. He turned to the Gimpel Art Gallery, where he visited regularly, and the two owners recommended that he get work at Robert Savage’s framing business where he would be in contact with young artists and the London art world. Here he was able to master methods of framing which he had learned previously, and he would later use these skills for his own art.

In London at the end of 1953, Christo met Anthony Denney, a photographer, art collector and interior design consultant. A very significant friendship began, through which Coetzee was able to meet many influential people including gallery owners and art collectors. In 1954, Christo began renting a room in Anthony’s house, which he paid for with paintings. The arrangement lasted for about 2 years until Christo left to live and work in Paris. Denney was also responsible for arranging Coetzee’s first solo exhibition in Europe in March of 1955, which took place at the Hanover Gallery in London.

In 1956, through the mediation of the British Council, Coetzee received funds from the Italian government to go to Italy for the first four months of that year. During his time there, he met many interesting people in the art world, such as the Russian painter, Pavel Tchelitchew, and Italian artist, Alberto Burri.

While Coetzee was in Italy Michel Tapié de Ceyleran, the French critic, visited Anthony Denney in London where he was taken in by a large painting of Christo’s which hung above Denney’s French antique chest of drawers. He immediately asked who the artist was, and then sent Christo an invitation, through Denney, to travel to Paris on his return from Italy and be introduced to the owner of the Galerie Rive Droite, Jean La Carde. Tapié was advisor to the gallery where talented painters such as Georges Mathieu, Jean Dubuffet and Alfred Wols regularly exhibited. Christo spent most of the next 10 years in Paris during which time he was in collaboration with the Galerie Stadler and under the guidance of Michel Tapié.

There was no lack of recognition for Coetzee’s original ideas and practices in persevering along the route of Informal Abstraction. During the period 1958–1961 his work was exhibited at a number of important international group exhibitions in Osaka and Tokyo (Japan), in New Hampton, Pittsburgh and New York (USA) and in Turin (Italy). In addition, in 1959 the Galerie Stadler requested him to participate in a two-man exhibition with Lucio Fontana in Paris. The latter exhibition was held just before he left to spend about a year in Japan with the help of a British Council Bursary (Ballot, 1999. pp 33, 34).

In Japan Coetzee was introduced to the avant-garde Gutai Group, and he remained in close contact with them. Before his return to Paris in early 1960 they invited him to exhibit his new works in Osaka at the Takashimaya gallery. The Gutai artists were as stimulated by his work as he with theirs. Shuzo Takiguchi noted that: ‘I see many changes in methods & forms of painting today & I am somewhat tired of an excess of method, but this painter’s work of the Informel type gave me a fresh feeling.’ (van Rensburg in Ballot, 1999).

In 1965, Christo left Paris after living and working there for 10 years and, after a short visit to South Africa, settled in Finestrat – a small mountain village in Spain. From that same year, after the large and important retrospective exhibition of Coetzee’s work from 1948-65 at the Pretoria Art Museum […], his work became increasingly familiar in South Africa. This should also be ascribed to the fact that after 1968 – the year he married Ferrie Binge – he travelled more regularly to the country of his birth. From that time his works [were] shown annually in solo and joint exhibitions in the most important art galleries in the country and reports on [them] appeared regularly in the media (Ballot, 1999. p 37).

In 1975, the day after the opening of a solo exhibition of Coetzee’s work in Cape Town, the artist went back to the gallery and cut up 23 of his paintings in what he called an act of ‘construction’ rather than ‘destruction’. The press labelled him sensationalist and angry, but Christo lectured that there was a cycle of destruction and recreation in his creative approach. Four months after this ‘protest exhibition’, as Coetzee called it, he restructured (or ‘re-imaged’, in his own words) these same works by combining the fragments and pieces of the original artworks creating new pieces to be shown at the Rand Afrikaans University’s Gencor Gallery in Johannesburg. This process of destruction and recreation was consistent throughout most of Coetzee’s oeuvre, and was largely a result of his contact with Michel Tapié (who was, in turn, inspired by Nietzsche and Bataille), as well as the time he spent with the Gutai group in Japan. He wrote two formal texts on the subject during the 1970s (van Rensburg in Ballot, 1999).

A second retrospective exhibition of Coetzee’s works was held in the Pretoria Art Museum in 1983, showing 81 works from 1965 to 1983, and he was awarded a medal of honour from the Akademie vir Wetenskap en Kuns that same year. A third retrospective took place at the University of Stellenbosch on his seventieth birthday in 1999, and was accompanied by a book illustrating his work from the previous 3 decades.

Coetzee died in Tulbagh at the age of 71 in November of 2000. Coetzee was always searching for magical and transcendental moments while extending the perceptions of art. As he recalled, he endeavoured ‘to push the imagination … just a little bit more towards that particular interface where Art becomes something that it is not.’ (Stevenson & Viljoen, 2001).