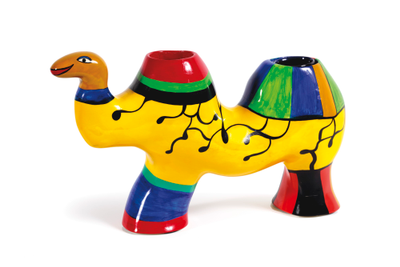 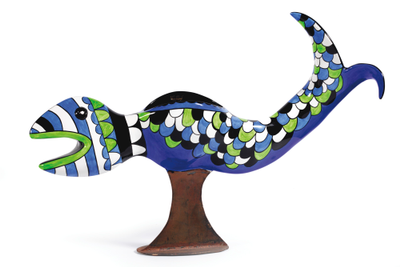 An enfant terrible ever trying to escape the bourgeois existence into which she was born, Niki de Saint-Phalle taught herself painting and rose to artistic prominence through her colorful monumental outdoor sculptures of extravagantly voluptuous female figures. Early in her career, she became known for the abstract paintings she made by placing paint-filled bags above canvases and shooting them—a form of protest against patriarchy and rigidity. Through her “nanas”, a series of life-size papier maché dolls of the proverbial “everywoman”—including brides and mothers giving birth—de Saint-Phalle contemplated women’s societal roles. Later, inspired by Antoni Gaudí´s Parc Güell in Barcelona, she set out to create something equally impressive but made by a woman; the result was Il Giardino dei Tarocchi (The Tarot Garden), a garden filled with colorful sculptures based on Tarot card symbols, which she created over 20 years on land she acquired in Tuscany.

With her oeuvre she celebrated the power of the woman fighting against male domination.

She was the incarnation of the #metoo -movement avant-la-lettre.