Salle
Back to Artists 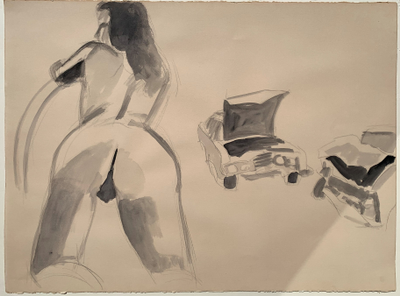 David Salle, (born Sept. 28, 1952, Norman, Okla., U.S.), American painter who, together with such contemporaries as Julian Schnabel and Robert Longo, regenerated big, gestural, expressionist painting after years of pared-down minimalism and conceptual art. Salle is known for mixing modes of representation and appropriated ready-made motifs in a single canvas, suggesting but defying any legible narrative. Employing the postmodern technique of pastiche, where the close display of disparate images and styles tends to reduce everything to equivalent signs, Salle’s paintings function as metaphors for the dizzying onslaught of media culture.

Salle grew up in Wichita, Kan., and from 1973 to 1975 attended the California Institute of the Arts (CalArts), where he studied with John Baldessari. In 1976 he moved to New York City, where he found work in a publishing house that specialized in romance and pornography magazines and began to collect images from its archive. His earliest work involved the strategy of overlaying images, and this quickly became his signature style.

Salle’s paintings reflect what is essentially a collage aesthetic, whereby he takes images out of their original context and recontextualizes them into complex ensembles. Like Robert Rauschenberg before him, Salle denies any hierarchy of subject matter by including both “high” and “low” imagery in a single canvas: famous art masterpieces with cartoon figures, high-end designed objects with pornographic imagery, and ornamental motifs with reproductions of newspaper photos, for example. In addition to mixing high and low imagery, Salle also mixes differing styles, including contour line drawings, modeled motifs, found objects, grisaille, crudely rendered images, and highly polished forms. Although he denied any iconographic intent in his pictures, his consistent use of aggressively posed nude women has elicited much response from feminists and others who object to the voyeuristic nature of his work.