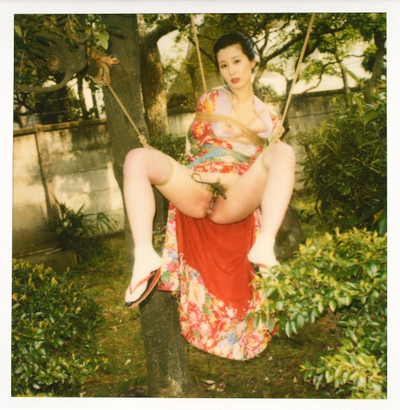 Nobuyoshi Araki was born in 1940 in Tokyo, Japan. He studied photography and film at Chiba University.

After his studies, Araki started working in advertising. He began to work exclusively as a photographer in 1972, and has since produced hundreds of photographic prints and books. Araki's work documents the quotidian elements of life: clouds, flowers, vibrant karaoke bars, Japanese toys, Tokyo cityscapes, and images of ordinary people - though he is perhaps best known for his nude photos of women.

Many of these often controversial nudes depict women tightly bound with ropes in the Japanese bondage style known as Kinbaku. Considered by some to be pornographic, these works draw upon the tradition of Japanese Shunga, woodblock prints from the 17th century. Araki takes photographs of women because photography for him is inextricably linked to love and eroticism. “A photographer who doesn’t photo- graph women is no photographer, or only a third-rate one. Meeting a woman anywhere teaches you more about the world than reading Balzac. I think that all the attractions in life are implied in women. There are many essential elements: beauty, disgust, obscenity, purity... much more than one finds in nature. In woman, there is sky and sea. In woman, there is the flower and the bud...”

At the traditionally conservative post-war Japanese society, 20th century enfant terrible photographer Nobuyoshi Araki shoots arrows of fire under the guise of violently sensuous photographs. The young boy who grew up near the Tokyo cemetery where prostitutes and other courtesans came to find eternal rest, developed a fascination for women, sex and death.

the childish obsessiveness of Araki’s art: the combination of playful experimentation and of a dark compulsivity.
By mixing together the different themes and symbols that he usually displays, Araki creates this fragile, dramatically touching photograph which may both be his most intimate and most disturbing work.

His works are part of numerous collections, including the Tate Modern in London and the San Francisco Museum of Modern Art.