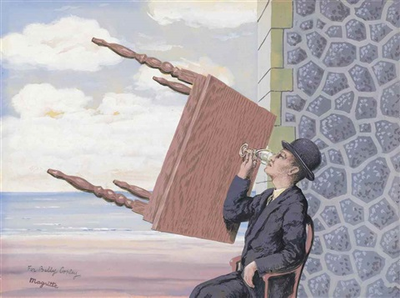 René Magritte was born in Belgium in 1898. After attending art school in Brussels, he worked in commercial advertising to support himself while he experimented with his painting. In the mid 1920s he began to paint in the surrealist style and became known for his witty and thought-provoking images and his use of simple graphics and everyday objects, giving new meanings to familiar things. With a popularity that increased over time, Magritte was able to pursue his art full-time and was celebrated in several international exhibitions. He experimented with numerous styles and forms during his life and was a primary influence on the pop art movement. He died in 1967.

René François Ghislain Magritte was born in Lessines, Belgium, on November 21, 1898, the oldest of three boys. His father’s manufacturing business at times allowed the family to live in relative comfort, but financial difficulties were a constant threat and forced them to move about the country with some regularity. Magritte’s young world was dealt a far more destructive blow in 1912, when his mother committed suicide by drowning herself in a river.

Magritte found solace from the tragedy in films and novels and especially through painting. His earliest surviving works from this era were accomplished in the impressionist style. However, in 1916 he left home for Brussels, where for the next two years he studied at Académie Royale des Beaux-Arts. Although he was ultimately unimpressed with the institution, he was nonetheless exposed to emerging styles such as cubism and futurism, which significantly altered the direction of his work. Indeed, many of Magritte’s paintings from the early 1920s owe a clear debt to Pablo Picasso.

The Treachery of Images

In 1921 Magritte began his one year of compulsory military service before returning home and marrying Georgette Berger, whom he had known since he was a boy and with whom he would stay for the rest of his life. After a brief stint in a wallpaper factory, he found work as a freelance poster and advertisement designer while he continued to paint. Around this time Magritte saw the painting The Song of Love by Italian surrealist Giorgio de Chirico and was so struck by its imagery that it sent his own work off in the new direction for which he would become known.

Placing familiar, mundane objects such as bowler hats, pipes and rocks in unusual contexts and juxtapositions, Magritte evoked themes of mystery and madness to challenge the assumptions of human perception. With early works such as The Lost Jockey and The Menaced Assassin Magritte quickly became one of the most important artists in Belgium and found himself at the center of its nascent surrealist movement. But when his first one-man show—in 1927 at the Galerie le Centaure—was poorly received, a disheartened Magritte left his homeland for France.

On the Threshold of Liberty

Settling in the Perreux-sur-Marne suburb of Paris, Magritte quickly fell in with some of surrealism’s brightest lights and founding fathers, including writer André Breton, poet Paul Éluard and artists Salvador Dalí, Max Ernst and Joan Miró. Over the next few years he produced important works such as The Lovers and The False Mirror and also began to experiment with the use of text, as seen in his 1929 painting The Treachery of Images.

But despite the progress Magritte was making in his art, he had yet to find significant financial success, and in 1930 he and Georgette returned to Brussels, where he set up an ad agency with his younger brother Paul. Though the demands of their studio left Magritte little time for his own work over the next few years, interest in his paintings began to grow and soon he was selling enough to leave his commercial work behind.

In the late 1930s Magritte’s newfound popularity resulted in exhibitions of his work in New York City and London. But the onset of World War II would soon alter the course of his life and art. His decision to remain in Belgium following the Nazi occupation caused a split between him and André Breton, and the suffering and violence caused by the war led him away from the often dark and chaotic moods of surrealism. “Against widespread pessimism,” he said, “I now propose a search for joy and pleasure.” Works from this period, such as The Return of the Flame and The Clearing, demonstrate this shift, with their brighter palettes and more impressionistic technique.

After the war, Magritte finalized his break with Breton’s branch of surrealism when he and several other artists signed a manifesto titled “Surrealism in Full Sunlight.” A period of experimentation during which Magritte’s created garish and provocative paintings followed before he returned to his more familiar style and subject matter, including a 1948 reimagining of his Lost Jockey, painted the same year as his first one-man exhibition in Paris.

With the arrival of the 1950s, Magritte enjoyed ongoing international interest in his work and continued his prolific output. In 1951 he was commissioned to paint a cycle of murals for the casino at Knocke-le-Zoute, a town on the Belgian coast. Completed in 1953 and titled The Enchanted Domain, they were a celebration of some of his best-known images. More commissions around Belgium followed, as did major exhibitions of his work in Brussels and the Sidney Janis Gallery in New York. Some of his most important works from this period include the paintings Golconda and The Glass Key. He also introduced the now-iconic apple into his work, most recognizably in 1964’s The Son of Man.

Despite having been diagnosed with pancreatic cancer in 1963, Magritte was able to travel to New York City for a 1965 retrospective of his work at the Museum of Modern Art. Magritte also explored other media during this time, making a series of short films that featured his wife, Georgette, as well as experimenting with sculpture. After a period of prolonged illness, on August 15, 1967, René Magritte died at the age of 68. His work proved to be a primary influence on pop artists such as Andy Warhol and has since been celebrated in countless exhibitions around the world. The Magritte Museum opened in Brussels in 2009.