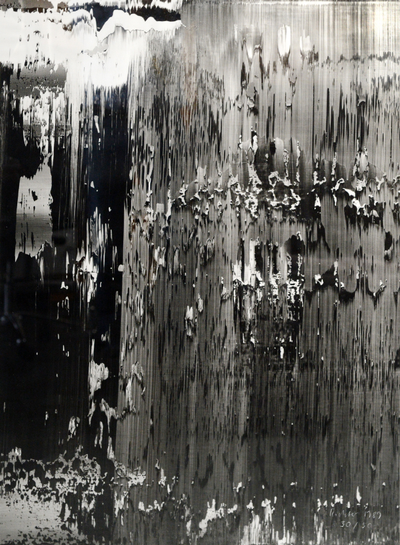 Gerhard Richter was born in Dresden, Germany, and grew up in the countryside, in Reichenau and Waltersdorf. He left school after tenth grade and apprenticed as an advertising and stage-set painter, before studying at the Dresden Art Academy. Richter taught as a visiting professor at the Hochschule für bildende Künste in Hamburg and the Nova Scotia College of Art and Design, and in 1971 became tenured professor at Düsseldorf Art Academy. In 1983, Richter moved from Düsseldorf to Cologne, where he continues to live.
Richter married Marianne Eufinger in 1957. Nine years later, she gave birth to his first daughter, Betty. He married his second wife, the sculptor Isa Genzken, in 1982. Richter had his son, Moritz, with his third wife, Sabine Moritz, the year they were married, 1995. One year later, his second daughter, Ella Maria, was born.

Richter had his first solo show, Gerhard Richter, in 1964 at Galerie Schmela in Düsseldorf. Soon after, he had exhibitions in Munich and Berlin and by the early 1970s exhibited frequently throughout Europe and the United States. His fourth retrospective, Gerhard Richter: 40 Years of Painting, curated by Robert Storr, opened at New York's Museum of Modern Art in February 2002, then traveled to Chicago, San Francisco, and Washington, DC. Richter has published a number of catalogues, monographs, and books of his artwork and notes on painting, and has been awarded many honors and prizes for his art. He continues to make and exhibit paintings.
Although Richter gained popularity and critical praise throughout his career, his fame burgeoned during his most recent retrospective exhibition, which declared his place among the most important artists of the 20th century. Today, many call Gerhard Richter the best living painter.