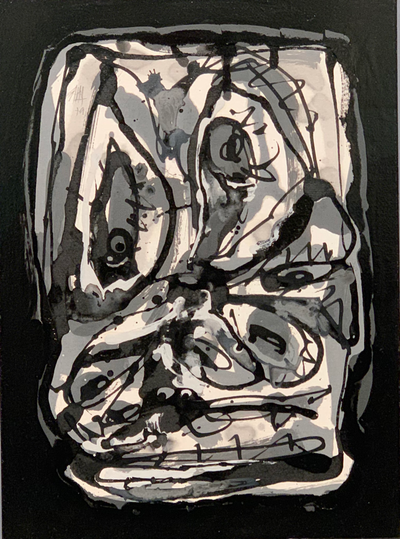 Antonio Saura was born on September 22, 1930, in Huesca, Spain. When Saura was young, his father took him to Madrid to visit the Museo del Prado, where he viewed paintings by Francisco de Goya and Diego Velázquez. After he contracted tuberculosis at age thirteen and was confined to his bed for five years, Saura reflected on his visit to the Prado. In 1947, on his way to recovery and without formal training, he began to produce art. Initially he experimented with diverse mediums, including paint, lithography, engraving, prose, and poetry.

In 1954, Saura moved to Paris, where he met Benjamin Péret and other Surrealists. His work of this period used biomorphic forms and recalled paintings by Joan Miró. Settling in Madrid in 1957, he began to paint in a more severe style with subject matter confined to repeatable motifs, such as the female body and portraiture. Stylistically, his work drew from the expressive painters of the New York school as well as from Art Informel artists such as Jean Fautrier.

Saura’s return to Spain inspired a return to Spanish influences. In the 1950s and 1960s, he made a series of paintings of a crucifixion scene that recall Velázquez’s own 1632 composition at the Prado. Saura’s limited palette, constrained brushstrokes, and gruesome subject matter also evoke Pablo Picasso’s work of the late 1930s, especially the monochromatic Guernica (1937). Saura, like Picasso, was struck by the photographs of the bombing of the Basque capital, but Saura’s expressive brushstrokes more directly index his emotional response to wartime death and destruction. In 1957 he founded the El Paso group (1957–60) with other artists based in Madrid. The group is considered part of the wider movement of Spanish Informalism, along with the Catalonian group Dau al Set (Seventh face of the die, 1948–53) and the painter Antoni Tàpies. Before disbanding, El Paso took part in two exhibitions in New York: New Spanish Painting and Sculpture at the Museum of Modern Art and Before Picasso, After Miró at the Guggenheim Museum (both 1960).

The continuous political upheaval of the 1960s left Saura with a conflicted relationship to his art. In 1965 and again in 1967, he destroyed hundreds of his paintings. In 1968, he abandoned oil painting altogether for ten years and worked in other mediums. Later in his career, Saura designed stage sets for ballets and performances, including a production of Carmen in Paris (1983). In 1995 he ventured into filmmaking, collaborating with his brother Carlos to make Flamenco, which featured the artist describing his painting process.

Saura’s first solo exhibition took place at the Libros de Zaragoza bookshop in Saragossa, Spain (1950), and an exhibition surveying his work since the 1940s appeared at Biblioteca nacional de España, Madrid (1956). He showed widely in Europe and the United States, including two monographic shows at the Pierre Matisse Gallery, New York (1961, 1971). Retrospectives have been held at many institutions, including the Stedelijk Van Abbemuseum, Eindhoven, Netherlands (1963); Institute of Contemporary Arts, London (1966); and Museo de arte contemporáneo, Madrid (1982). In 2003, the Guggenheim Museum Bilbao presented Antonio Saura: Memory and Recollection. Saura received numerous honors and awards, including the Guggenheim International Award (1960) and the Grand Prix des Arts de la Ville de Paris (1995). He was awarded the Carnegie Prize for his contribution to Documenta, Kassel, West Germany (1964). Saura died on July 22, 1998, in Cuenca, Spain.