Chadwick
Back to Artists 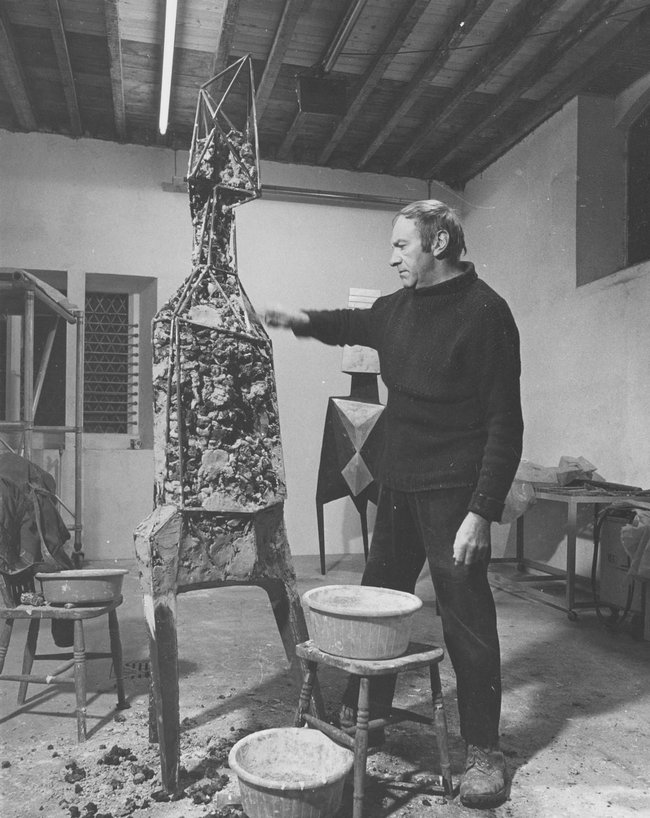 Lynn Russell Chadwick was born in London on 24 November 1914. After attending the Merchant Taylor School and a stay in France, Chadwick worked for several London architect's practices between 1933 and 1939. At that time he focused on techniques of draughtsmanship and watercolour as well as oil painting.
During the second world war Lynn Chadwick served a stint as a land labourer before volunteering as a Royal Navy pilot and serving between 1941 and 1945. On his return to London, he began to experiment with mobiles and earned a living, not unsuccessfully, as a freelance designer until 1952.
Collaboration with the architect Rodney Thomas proved a formative influence on Chadwick and from 1951 Chadwick received commissions for sculpture. He had a solo show at Gimpel Fils in 1950.
For his figures, Lynn Chadwick mainly used pieces of iron welded together, which, as mobiles, are reminiscent of Calder's work but as stabiles filled with concrete stand on long legs and resemble a cross between abstract constructs and figurative skeletal beings.
Chadwick achieved instant recognition in the 1950s when his objects were awarded numerous prizes (Venice 1956, Padua 1959, Lugano 1960) and were shown at exhibitions of international stature (1952 and 1956 Venice Biennales).
Lynn Chadwick received commissions for more monumental sculptures, gradually transforming his rough, often aggressive-looking animal figures into softer, even more sentimental compositions with anthropomorphic features. While continuing to do standing figures, Chadwick turned increasingly often to recumbent or seated pairs of figures.
At home in Lypiatt Park, Gloucestershire, Chadwick established a sculpture park of his own.
Long since a Commander of the British Empire (1964), Chadwick was also made an Officier de l'Ordre des Arts et des Lettres in 1985. Although his work was in its heyday in the 1950s, Chadwick continued to develop his figures within the context of his material idiom until the century closed.
By the time Lynn Chadwick died in Stroud, Gloucestershire on 25 April 2003, he was one of the best-known sculptors of the post-war era.