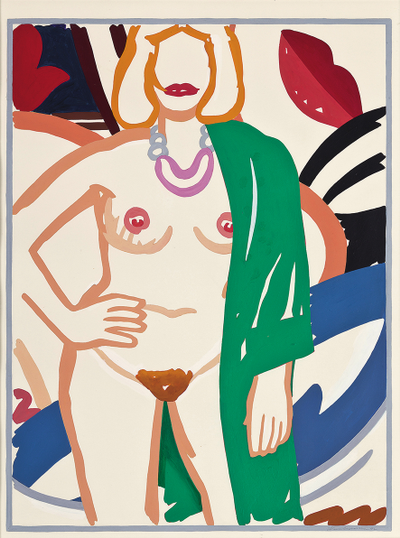 Tom Wesselmann was born in Cincinnati Ohio on February 23 1931. He attended college from 1945-1951, first at the Hiram College in Ohio and then the University of Cincinnati, where he majored in psychology. He was drafted during the Korean War in 1952, and it was during this time that Wesselmann did his first cartoons. After he was discharged and had finished in degree in psychology, Wesselmann began to study drawing at the Art Academy of Cincinnati. He sold his first cartoon strips to two magazines, 1000 Jokes and True.

In 1956, he was accepted to Cooper Union in New York and he continued his studies there. It was while he was studying in New York, specifically on a trip to the MoMA that Wesselmann became inspired by Robert Motherwell and Willem de Kooning. In 1958, a landscape painting trip to Cooper Union’s Green Camp in New Jersey brought him to the realization that he could make his career in painting, rather than cartooning.

After graduation, Wesselmann became one of the founding members of the Judson Gallery, along with Marc Ratliff and Jim Dine. Wesselmann also began to teach art at a public school in Brooklyn and later at the High School of Art and Design.

In 1961, Wesselmann began the series that would bring him to the attention of the art world, Great American Nude. After a dream concerning the phrase “red, white and blue”, Wesselmann decided to limit himself to a palette of only those colors (including colors like gold and khaki that are associated with patriotic motifs). This series incorporated representational images along the same patriotic theme, including American landscape photographs and portraits of the founding fathers. Wesselmann often collaged these images from magazines and discarded posters which required him to work in a much larger format than he was used to. As his works became larger and larger he approached advertisers directly to acquire billboards. Wesselmann’s first solo show was held in 1961 at Tanager Gallery. In 1962, Richard Bellamy gave him a one man exhibition at the Green Gallery.

In 1962, Wesselmann participated in the group exhibition “New Realists” at the Sidney Janis Gallery and kicked off his international career. In that same year his first pieces with the title of Still Life, came about. In these works, Wesselmann concentrated on the juxtaposition of different elements, i.e. a cigarette ad next to a painted apple. He found excitement in the clashing of different realities and who they feed off of one another. In 1963 he married his wife and fellow student at Cooper Union, Claire Selley, who was also his most important model. In that same year he began the series Bathtub Collages. In 1964 came Bedroom Paintings, along with Seascapes and Smoker, which he continued on into the 1980s. In 1980 he published a written study on his own work under the pseudonym Slim Stealingworth. In 1983, the first of his Metal Works series were produced, which were based on his sketches and drawings.

Because of his choice of trivial objects, their monumentalisation and subsequent reduction to stereotypes, combined with his use of bright color, Wesselmann is considered one of the founders of American pop art. Wesselmann was never very comfortable with this inclusion in the pop art group. He felt that he made aesthetic use of everyday objects rather than a criticism of them as consumer objects. He felt that the term “pop” overemphasized the materials used and that his intentions were not that of other pop artists.. Today, the artist’s works are in the collections of the Art Institute of Chicago, The Museum of Modern Art in New York, the Tate Gallery in London, and the National Gallery of Art in Washington, D.C., among others.