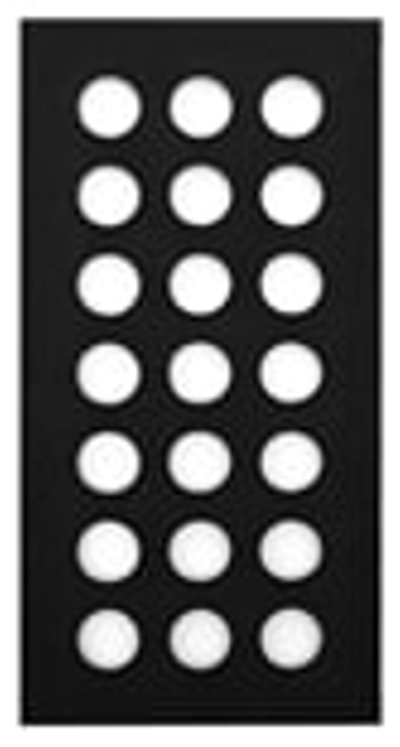 Dadamaino was an Italian artist best known for her black-and-white hole paintings. This series,Volumi (Volumes), made in dialogue with the work of Lucio Fontana, exemplifies Dadamaino’s development of a conceptual, spatio-temporal approach to painting. Born Eduarda Emilia Maino on October 2, 1930 in Milan, Italy, she studied medicine before deciding to pursue an art career, where she emerged as a pioneer in the avant-garde movements of her time. The artist joined the Azimuth collective founded by Arte Povera artist Piero Manzoni, and later joined the Nouvelle Tendance movement with Getulio Alviani, Bruno Munari ao. In the first half of the 1960s, the artist created Spatialist objects synthesizing color, space, and movement, followed by her production of Ricerca del Colore (Color Search), a serial analysis of the solar spectrum’s chromatics. She then turned to text-based art, creating signs resembling letters with repeated text, notably in L’Alfabeto della Mente (Alphabet of the Mind) from the late 1970s, and Fatti della Vita (Facts of Life), shown at the Venice Biennale in 1980. Retrospectives of her work have been mounted by the Padiglione d’Arte Contemporanea in Milan and the Bochum Museum in Germany. The artist died on April 13, 2004 in Milan, Italy. Her works are in the collections of the Tate Gallery in London and the Peggy Guggenheim Collection in Venice, among others.