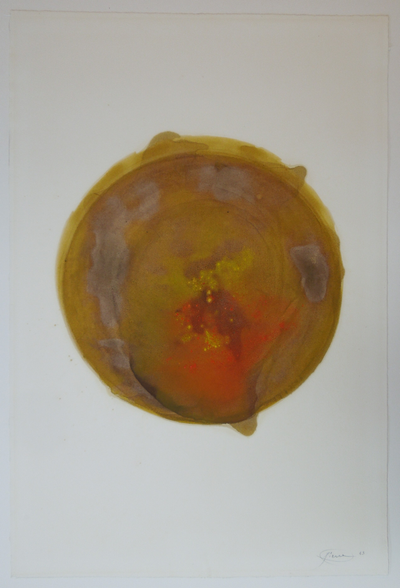 Otto Piene was born in 1928 in Bad Laasphe and was raised in Lübbecke. At the age of 16, he was drafted into World War II as an anti-aircraft gunner. As a German soldier, he became fascinated by the glowing lines of searchlights and artillery fire in the night.

Post-war from 1949 to 1953, he studied painting and art education at the Academy of Fine Arts, Munich, and at the Kunstakademie Düsseldorf. He was a lecturer at the Fashion Institute in Düsseldorf. From 1952 to 1957, he studied philosophy at the University of Cologne.

He was a Visiting Professor at the University of Pennsylvania beginning in 1964. From 1968 to 1971, he was the first Fellow appointed to the Center for Advanced Visual Studies (CAVS), founded by György Kepes at the Massachusetts Institute of Technology. The CAVS allowed artists to work using sophisticated techniques and scientific partnership, promoting a highly-collaborative environment. In 1972, Piene was appointed a Professor of Environmental Art at MIT. In 1974 he succeeded Kepes as director of the CAVS, a position he served until September 1, 1993. Piene remained closely associated with CAVS and MIT for the rest of his life, and maintained longtime homes in both Groton, Massachusetts and Düsseldorf, Germany.

Piene collaborated with many artists, scientists, and engineers, including "Doc" Edgerton (pioneer of stroboscopy) and astrophysicist Walter Lewin at MIT.Many of his public installations required multiple collaborations because of their large physical scale and ambitious program. For example, his 1977 Centerbeam installation involved 22 artists and a group of scientists and engineers, some of whom were based internationally.

On July 17, 2014, Piene died of a heart attack in a taxi on the way to ready for the opening of his Sky Art event at Neue Nationalgalerie in Berlin, Germany. His survivors included his wife Elizabeth Goldring (a poet and artist who collaborated with him), as well as four children, a stepdaughter, and five grandchildren.